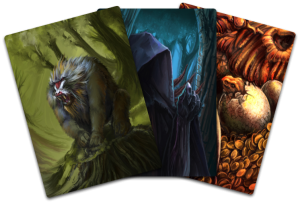 The Tome of Calling Story

Hidden away in a long forgotten tower there once was an ancient book named the Tome of Calling.

Some believed it held the true names of all creatures, both dreaded and powerful. Knowing these names would make one invincible as the Tome of Calling could force even a mighty dragon to do ones bidding.

When the great war started, the Tome of Calling was in the center of it. Many mages used it for one side or another. In the end it was torn apart, its pages scattered all over the realm.

Many years later rumor of the Tome spread and bold young mages set out to find it. A few came by some of the ancient scrolls and learned how to call upon the mighty creatures.

Feeling the incredible power at their hands, the mages knew what had to be done. They had to gather all scrolls before anyone else did. But will they use it for good or will it only become a way to gain power above all…

Welcome to Tome of Calling! ToC is our attempt at an easy to learn, quick to play fantasy card game. It is aimed at an audience of 12+ with groups of 2-4 players (although one can play it with more people). We are currently in the middle of development and want to use Kickstarter for financing the game in a few months. Artworks and testings are being done and we want to show you our progress in the days to come. We are happy if you bookmark this page and connect with us on Facebook.